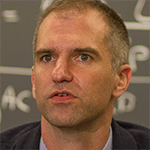 Seth Mnookin is Director of the Graduate Program in Science Writing and a Professor of Comparative Media Studies/Writing at MIT. His most recent book, The Panic Virus: The True Story Behind the Vaccine-Autism Controversy, won the National Association of Science Writers “Science in Society” Award and was a finalist for the Los Angeles Times book prize. He is also the author of the 2006 New York Times bestseller Feeding the Monster: How Money, Smarts, and Nerve Took a Team to the Top and 2004’s Hard News: The Scandals at The New York Times and Their Meaning for American Media, which was a Washington Post Best Book of the Year. His 2014 New Yorker piece on rare genetic diseases won the American Medical Writers Association prize for best story of the year and was included in the 2015 Best American Science and Nature Writing anthology. His essays and reporting have appeared in numerous publications, including Vanity Fair, Science, The Boston Globe, STAT, Smithsonian, New York, Wired, The New York Times, The Washington Post, Spin, Slate, and Salon.com.