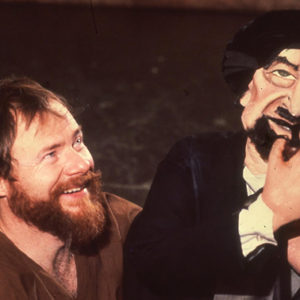 Founding Underground Railway Artistic Director Wes Sanders leads a post-show conversation about Paradise, and shares news about an upcoming book about the first 20 years of URT’s history as a national touring company.

Wes Sanders – actor, director, playwright, puppeteer – was founding Artistic Director of Underground Railway Theater, and served in that position for 20 years. He helmed the creation of new works that engaged with themes of social justice, all of which toured nationally: Sanctuary – The Spirit of Harriet Tubman, Home Is Where, The Christopher Columbus Follies and InTOXICating – An EcoCabaret, to name a few. He also led URT’s collaborations with symphony orchestras, including multiple commissions from the Boston Symphony, most recently an original orchestral version of Tempest. Roles with other companies include Shakespeare and Beckett at The Court and other Chicago theaters (Macbeth, Petruchio, Mercutio, Clov, Hamm); Herb Blau’s Kraken Group; and Serebriakov in an adaptation of Chekhov’s Uncle Vanya at Vermont Stage. For ten years he was a professor of English at Oberlin College. Currently, he is writing a book about the first 20 years of Underground Railway Theater’s work.