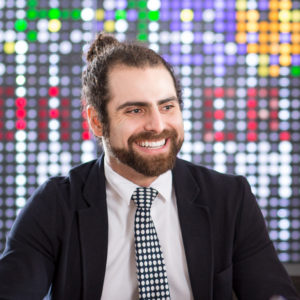 Join us after the 8 PM performance of Paradise on Friday, April 7, 2017 for a discussion with Cambridge City Councilor Nadeem Mazen, the first Muslim politician elected to a Massachusetts government post.

Nadeem Mazen is an educator, entrepreneur, and community organizer. He was elected to Cambridge City Council in 2013 after an energetic grassroots campaign, winning by just 6 votes – being returned to office in 2015, receiving the most votes across all 23 candidates for City Council. In his first two terms, he has worked to make city government more accessible to the public and is building coalitions that address Cambridge’s most pressing issues. He has also focused on social justice issues and greater equity for all members of our community. You can read his civic updates at Nadeemtron or learn more about his campaign at VoteNadeem.

Nadeem first arrived in Cambridge to study Engineering at MIT. After graduation, he founded two community-oriented businesses in Central Square: Nimblebot, a creative agency, and danger!awesome, a makerspace that brings creative expression and tools to the masses. He is a natural collaborator and problem-solver, dedicated to bringing fresh, progressive voices into community leadership. Over the past three years, Nadeem has organized a team of volunteers and community organizers who are proving that a truly progressive Cambridge is possible.