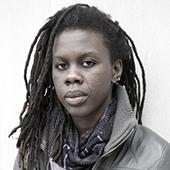 Join us for a post-show Scholar Social with Charlotte Brathwaite, Assistant Professor of Theatre Arts at MIT!