Thank you for exploring universes with us this season. From the multiverse of Constellations to our own galaxy in The Women Who Mapped The Stars, from Dickens’ global London (A Christmas Carol) to the mind of genius (Proof), from the mythology of the Taj Mahal to pre-revolution France – twice! – our stories share one uniting theme: the journey we flawed, troubled, loving, inspirational human beings take to become ourselves is the hardest one of all.

We celebrate the people who make it: The Women Who Mapped the Stars’ Cecilia Payne, Proof’s Catherine, The Revolutionists’ Olympe deGouges, and A Christmas Carol’s Ebenezer Scrooge. And we (hopefully) learn from the ones who don’t.

In our final production of the season, Les Liaisons Dangereuses, who succeeds in their journey and who doesn’t is a matter of interpretation. Does love redeem Valmont? Is Merteuil’s victory an actual win? Can Merteuil ever actually become herself in a society created and defended by a patriarchy? Is such society sustainable? This is the Nora – you know my answer that that one.

When I first directed an all-male production of Liaisons in 2005 at the Actors’ Theatre of Washington, the only LGBTQ theatre company in the Washington, D.C region, laws expanding or restricting LGBTQ rights were ricocheting around the country. Among many events, Kansas voters approved an amendment to the state constitution banning same-sex marriages and civil unions. Microsoft withdrew support for H.B. 1515, which would have made it illegal to fire an employee based on sexual orientation, after pressure from local clergyman Ken Hutcherson who threatened the company with a nationwide boycott. Arnold Schwarzenegger, governor of California, vetoed the bill passed in September legalizing same-sex marriage while Mark Warner, governor of Virginia, issued an executive order banning sexual orientation discrimination in the public sector.

It was a choice of Actors’ Theatre of Washington Artistic Director Jeffrey Johnson to hire me, a cis-gendered, heterosexual women (back then we just said “straight”) to direct a production that celebrated human sexuality without judgement or definition. Women and men, together, examining a fundamental and misunderstood piece of our humanity.

The conversation has evolved since then, although the human tendency toward fearing the “other” and thus creating discrimination and violence hasn’t. A world that has such things as micro-aggressions, Incels, child marriages, the killing of women who speak out for fundamental human rights, a government that removes a woman’s access to health care and choice, where consent is debated and people aren’t taught that “no” is an answer to be respected, much less heard, is our everyday existence.

The Supreme Court recently upheld that companies can use arbitration clauses in employment contracts to prohibit workers from banding together to take legal action over workplace issues – arbitration clauses, exposed by the #MeToo movement, that allowed employers to conceal sexual abuse and harassment by top executives. This is our world. A play about women navigating a man’s world is an old story.A play in which men are required to speak in women’s voices, live a woman’s life, love and engage in sex, grapple with consent as a woman, navigate an unequivocal male world as a woman – that’s a Nora play.

I am the most fortunate person to be working with this amazing cast, led by Dan Whelton, Greg Mariao, and Eddie Shields. To a person, these men have embraced the subtle difference between portraying a woman and playing the qualities in a human being. They have approached the production with open hearts and have asked the very questions you may have. I am transparent in that I don’t have all the answers – I have opinions based on my experiences, as do you. Les Liaisons Dangereuses is a masterpiece of language, gender and sexual politics and the examination of the worst of our very human flaws: pride. I also find it tender and funny and touching.

The novel Les Liaisons Dangereuses was written in 1782 – a very old story. I live in faith that in (fill in the blank) generations, it will be a true period piece, living dusty on a shelf because it will be seen as passé. In the meantime, the play still has something to say.

As does our next season, which is just as provocative and engaging as I hope you have found this one. We create the worlds in which the hard questions are asked. It’s what we do. Take the leap with us. 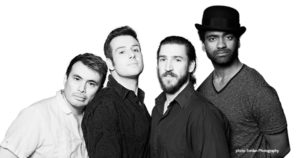 France, before the revolution. Two decadent, aristocratic ex-lovers conspire in drawing rooms and boudoirs, swooping down on the innocent and naïve, and playfully keeping score of their depravity with delicious ribald wit. Lee Mikeska Gardner helmed the play in Washington DC with an all-male cast. Bringing that concept to The Nora, notions of gender politics are skewed with the sexual, amoral, manipulative game envisioned through new eyes. Money, mayhem and men – see why Gardner’s production was hailed as “Gutsy… groundbreaking theater” by DCist.