Through the creation of this Fund we endeavor to sustain the support needed to elevate and propel Youth Underground–driven by the passion and curiosity that embodies its namesake, Betsy Bard.

In 2019-20, the Betsy Bard Youth Underground Fund will support the tour and community outreach activities of Act Up and Vote. 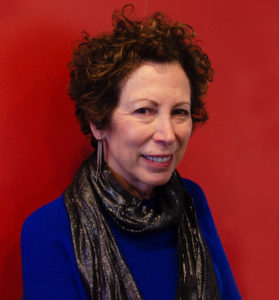 For 35 years, Betsy Bard has been entrenched in the world of curiosity.  Recently retired, Betsy served as Social Worker and Manager of the Cambridge Rindge and Latin School on-site Day Care Center.  To expand her passion for social justice and theater, Betsy worked with Anna Deavere Smith in 2000 as the audience coordinator at her Institute on the Arts and Civic Dialogue at Harvard University.  This experience inspired her to start her own documentary theater project with youth using Deavere Smith’s methodology to investigate issues of concern. Launched at Cambridge Rindge and Latin School in 2003, The Theater Project premiered its first production based on recorded interviews investigating  “the achievement gap”. Through The Theater Project, Betsy Bard directed and produced five plays with support from the City of Cambridge, Harvard University, and Cambridge Community Foundation. In 2010, Betsy joined the Youth Underground (YU) team, bringing her experience and passion for authentic investigative theater that provokes civic dialogue and action beyond the stage. YU  is a socio-economically, culturally, and ethnically diverse youth Ensemble serving ages 13-25, with stipend-eligible opportunities to create theater together and in tandem with community-based organizations, and showcase their work across Greater Boston. YU is the only Greater Boston youth theater program that focuses on creating devised work that shines a light on social justice issues of concern from/for young people, and moderates companion community dialogues about each issue raised in the thematic plays. As Lead Teaching Artist and Playwright, Betsy has created eight YU investigative theater plays, including Money Matters, You Can Tell at Lunch, Crossing Borders, Six Years Online, Find Out What it Means to Me, Don’t Knock Opportunity, and Circle Up! Currently, Betsy is working on the multi-year Act Up and Vote!, a new play that shares stories from voters and activists in underrepresented communities; addresses questions about elected official representation; and examines voting access across communities.  Betsy extended her leadership as an Educator, Artist, and Activist by joining the Central Square Theater Board of Directors in 2011.