Jacob Athyal (Humayun) is a Boston-based actor from the state of Kerala in South India. He is excited to be back at Central Square Theater after A Disappearing Number. His recent credits include The Elaborate Entrance of Chad Deity (Perseverance Theater, Alaska), A Midsummer Night’s Dream (Actors’ Shakespeare Project), Luna Gale (Stoneham Theatre Co.), Red Hot Patriot (Lyric Stage Co.), Shockheaded Peter and The Elaborate Entrance of Chad Deity (Company One), Mrs. Packard and Julius Caesar (Bridge Rep of Boston), The Hobbit (Wheelock Family Theatre), The Draft (Hibernian Hall), Incident in Vichy (Praxis Stage), Sh*tfaced Shakespeare (Magnificent Bastards Production), The Reindeer Monologues (Happy Medium Theatre). Special thanks to Rajiv and Gabriel for this opportunity and Harsh for being such a great friend. 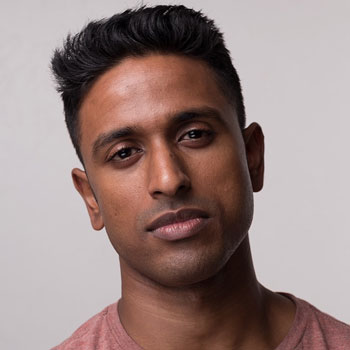