Laura Maria Censabella’s plays have been produced or workshopped by The Philadelphia Festival Theatre for New Plays, The Women’s Project & Productions, The Working Theatre, m2 productions, Interact Theatre in L.A., the American Living Room Series at The Ohio, the AthenaWorks Marathon, the Belmont Italian American Playhouse (which commissioned her play Some Girls), the Pacific Resident Theatre, The Festival of Faith and Writing at Calvin College, Wide Eyed Productions, and Ensemble Studio Theatre, where she is a member and runs the professional Playwrights Unit. Her most recent full-length play, Paradise, is an EST/Alfred P. Sloan Foundation Commission and will be workshopped at The Athena Project in Denver in March 2014. Her one act play Interviewing Miss Davis was produced in 2010 in Ensemble Studio Theatre’s One Act Marathon of Plays. Her children’s musical O’Sullivan Stew, written with composer-lyricist Frank Cuthbert, was commissioned and produced in 2010 by Greene Arts Foundation, and an abridged version toured under the auspices of Urban Stages Outreach. Urban Stages then commissioned her musical The Last Pine Tree on Eagle Mountain, (also written with composer-lyricist Frank Cuthbert) which toured in 2012 and 2013.

Ms. Censabella has been awarded three grants from the New York Foundation for the Arts: two in playwriting for Abandoned in Queens and Three Italian Women (a/k/a Carla Cooks The War), and The Geri Ashur Award in Screenwriting for her original screenplay Truly Mary. Truly Mary was subsequently developed at The New Harmony Project with director Angelo Pizzo and producer Michael London. She has also been a two-time participant in the O’Neill Playwrights Conference for Abandoned in Queens and Jazz Wives Jazz Lives and has received writing fellowships from Yaddo, the Virginia Center for the Creative Arts, The New Harmony Project and the O’Neill. Her short play Posing was nominated for a Pushcart Prize, and The Actual Footage won the Tennessee Chapbook Prize for Drama. Both plays are published in Poems & Plays (Numbers Five and Seven), as is her play Stones Fall, Birds Fly (Number Sixteen). Her play Interviewing Miss Davis is published in the St. Petersburg Review 4/5 and online by IndependentPlaywrights.com; and her long one act Abandoned in Queens will be published in The Best American Short Plays of 2014.

She has written the short film adaptation Physics for HBO’s Women: Breaking the Rules series, and for two years she wrote for daytime serial television, winning two Emmy Awards. Her half-hour independent film Last Call (directed by Robert Bailey and starring Jude Ciccolella and Dana Dewes) was an official selection in festivals throughout the world, and won the Best Short Drama Award at the Breckenridge Film Festival.It is released by Cinequest on a compilation DVD entitled Second Sight: Cinequest Favorite Short Films, Volume II and is available on Netflix (search: Second Sight, Vol. 2).

She is a member of the Dramatists Guild, the Writers Guild of America, East, and the League of Professional Theatre Women. She received a B.A. in Philosophy from Yale College. 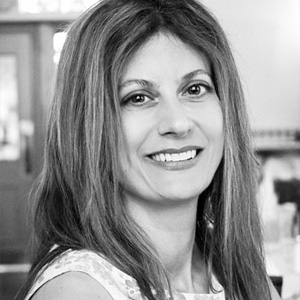