Madeleine George’s two novels are published by Viking Children’s Books. Her first book, LOOKS, was one of Booklist’s 2008 Top Ten First Novels for Youth, and a 2009 ALA Best Book for Young Adults. Her second book, THE DIFFERENCE BETWEEN YOU AND ME, was a Kirkus Best Teen Book of 2012, a Junior Library Guild selection and an ALA Rainbow List selection, and was chosen as the Atlantic Wire’s Best Complicated Romance of 2012.

Madeleine’s plays, including THE (CURIOUS CASE OF THE) WATSON INTELLIGENCE, SEVEN HOMELESS MAMMOTHS WANDER NEW ENGLAND, PRECIOUS LITTLE, and THE ZERO HOUR, have been produced at theaters around the country. She was a founding member of the Obie-winning playwrights’ collective 13P (Thirteen Playwrights, Inc.), and is a resident playwright at New Dramatists.

Madeleine grew up in Amherst, Massachusetts, and now lives in Brooklyn. 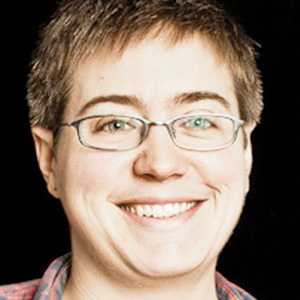