Roberto Cassan (Musician) began studying accordion when he was eight years old. At sixteen, he was already playing professionally for public events and folk festivals in Italy and throughout Europe.  Later in his teens, while studying for his Degree in Musicology at the University of Cremona (Italy), he began to perform and compose music for the experimental theater group Teatro Sintetico, and to collaborate with musicians of different
musical backgrounds (jazz, rock, ethnic and classical). In 1991 he came to the USA to study at the Berklee College of Music in Boston, where he currently lives and works as a professional performing and recording artist.His love for music from around the world led him to explore and master different repertoires, Argentine Tango, French musette, Balkan, South American and Brazilian, focusing his attention on musicians/composers such as Astor Piazzolla, Dino Saluzzi, Hermeto Pascoal, and Richard Galliano. He collaborated and recorded with many artists, including Mexican folk singer Lila Downs, singer songwriter Martin Sexton, composer John Harbison, theater director Diane Paulus, Alain Mallet, Claudio Ragazzi, Peggy Pearson, Club D’Elf, Jessica Lurie, harpist Maeve Gilchrist, Anna Myer dance company, John Muratore, Bruno Oro, among others.He Recorded the Soundtrack for the PBS/TV Series Letters from Buster, for the episode The Accordion Festival of San Antonio (Claudio Ragazzi), Three Tangos for the TV Series LOVE BOAT (Brad Hatfield BMI), Three waltzes for accordionmfor the pilot TV Series, American Plumber (Discovery Channel), composed and performed The whispering wind for the movie Profit motive and the whispering wind, by independent film maker John Gianvito. In 2011 he played at The American Repertoire Theater (Cambridge MA), for the very successful new production of – The Gershwins’ Porgy And Bess. 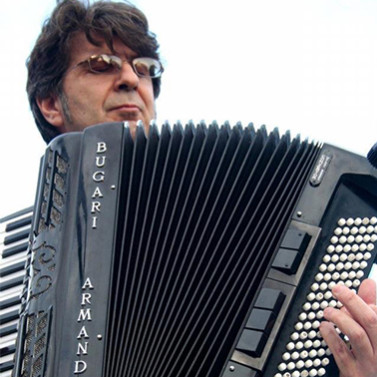