Her Aching Heart composer Veronica Barron and music director Mary Bichner talk to intern Rebecca Joy about the versatility of stringed instruments and the appropriate “bigness” of love ballads. 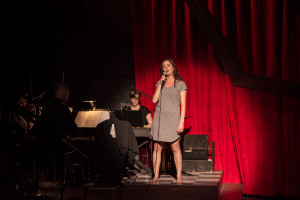 Rebecca Joy: As I understand it, the script for Her Aching Heart includes lyrics but no musical score. How did you decide on a musical style?

Mary Bichner: It was our incredible director Lee Mikeska Gardner and our amazing composer Veronica Barron that set the tone for the musical style; I then chose the instrumentation based on their suggestions. I decided to go with a small string section as I love how versatile strings can be — anywhere from piquant and charismatic to lush and romantic. In the score, the string parts tend to be the amplification of the characters’ current emotions, whatever they may be at the time (and there are quite a few!)

Veronica Barron: In my first meeting with Lee, we talked about the awesome era for female singer-songwriters that was the 1990’s—a golden time for folks like Sarah McLachlan, Lisa Loeb, and Tori Amos. I started making a listening mix from these artists. I was also interested in those “big feelings” songs we listen to when heartbroken and had a strong feeling that I wanted the opening number to be a twangy, yearn-ful ballad. So, I added songs from artists like Lucinda Williams and Dolly Parton (who, as I learned, penned the mega-heartbreak-hit “I Will Always Love You.”) Finally, I put out a call on Facebook asking people to suggest female singer-songwriters that I should know, and I added them to my list. I listened to this mix to get ideas of voices, styles, and sounds I liked, and then once I had those sounds in my ear, I was able to pull from them when working on the songs.

RJ: Why do you think the music is important to the story of Her Aching Heart?

MB: I love how the songs provide a candid glimpse of the characters’ inner thoughts — we don’t learn as much about the modern-day characters’ emotions through the script as we do the romance novel characters, so the songs give us valuable insight into what present-day Molly and Harriet are thinking. Plus, it shows that they ponder in verse, which I do all the time!

VB: When we’re broken-hearted or in love, I think we want to hear things that match the bigness of our feelings…and songs can contain big emotions. Sometimes that bigness can sound over-the-top, maybe a little melodramatic or cheesy, but in that heightened emotional state, the melodrama of these songs can feel very natural and indeed, essential. I remember being broken-hearted for the first time at age 17, driving around town, listening to the same song on repeat while tears literally soaked the front of my dress. If I’d had to explain to someone how I was feeling, I wouldn’t have been able to do as good a job as the song I was listening to. In the songs of Her Aching Heart, we get to experience the absolutely earnest emotional states of each character, but in a way that is a bit larger than how we’d express it in ordinary, naturalistic life. Since this play is a bit larger than life in other ways (i.e. the book characters), I love that the songs give the contemporary characters something bigger to house their emotions in. 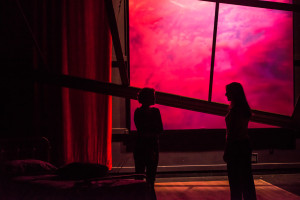 MB: It’s hard to choose just one! I suppose if forced to pick, I really love the song “Restless” — Veronica perfectly captures the feeling of nervously pacing around one’s room in her melody, and actress Aimee Rose Ranger does an amazing job of interacting with all of the spooky, unsettling sounds played by the strings. It’s tons of fun!

VB: I would have to go with “It’s Spring – Hearts Mend.” I wanted to create this lovely feeling of hope and spring and life, as this is the moment when the characters begin to feel that love might be possible again, but I felt like the lyrics were really working against me, and I thought they were just bad lyrics: “A slug tracks across a leaf/Its shiny trail shines in the weak sun.” It was like, “Come on, Bryony Lavery, ‘shiny trail shines’? Give me something to work with here!” Then I realized that instead of being bad lyrics, they are hilarious, and that, actually, Lavery had given me comic gold. So the song has a lot of earnestness and is genuine in its emotional tone, yet the lyrics are absurd and delivered with a straight face.