Anyone who has seen Homebody will remember the beautiful hats. These were made for our production by Heather Daveno. She sat down with us to tell us more about her craft, her travels and her work for charity. 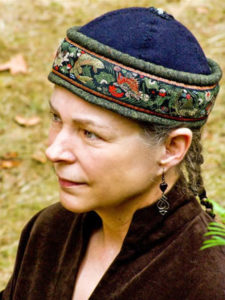 I am a self-taught, American-born artisan with a penchant for making new things out of old things.

I’ve been a hatmaker for over 20 years. My hats are one-of-a-kind wearable artworks, handcrafted from reclaimed textiles and found objects, using patterns, motifs and embroidery / applique techniques that date back several centuries. Working with old textiles and techniques gives me a sense of reclaiming history, while giving a contemporary use to previously discarded objects. Most of my inspiration comes from non-textile art forms, including architecture (Italian ceilings and Turkish mosques), objects (Venetian canal bridges and Spanish tiles), and illuminated manuscripts from medieval Europe, Russia and Persia.

To see before and after shots of the hats I created for Homebody Kabul, please visit my business Facebook page:https://www.facebook.com/pg/AugustPhoenix2/photos/?tab=album&album_id=10154810400276672

Learn more about me and what my customers say at www.augustphoenix.com.  I welcome custom work!

Have you always been a creative person?

Yes, it might be an inherited trait : ).  I come from a family of “craft hobbyists,” with my dad working in leather, my mother in textiles (sewing and knitting), a grandparent who was a ceramist, another who was a carpenter.  My brother is a magician, I also used to be a storyteller, specializing in the tales of the Monkey King as immortalized in “Journey to the West.”
My mother taught me to embroider when I was around 8 or 10 years old, which gave me an appreciation for ‘creating something from nothing.”  The tactile aspects of working with textiles is also very relaxing, whether that be embroidery, knitting, weaving, or creating things to wear.
The “creating something from nothing” was also a trait I think I inherited from my parents and grandparents.  If you cannot afford to buy something new, you find a way to reuse what you already have.  That practice gave me an appreciation for bringing old things to life in new forms, and I learned to distinguish quality textiles (and clothing labels) from the more run-of-the-mill stuff, which has become part of my branding.

When did you first begin making hats? What inspired you?

In the 1980’s I joined a historical educational group  that focused on the study and ‘reenactment’ of various aspects of medieval Europe.  People strived to dress authentically to the period at these reenactments, but very few people wore hats, which I thought was odd.  So I started researching headwear, drafted some patterns and taught myself to make hats from the scraps of my own felt costumes and fur coats from thrift stores.  My first hats were plain, six panel hats with exposed seams and a fur cuff, based on a Mongolian / Russian / Viking model.  Upon discovering Celtic knotwork, I began to embroider my hats with simple motifs on the panels. The more cultures and time periods I studied, the more ornate my hats became.  In 1999 I went “mainstream”, applied for a business license, a friend built me a website, and I started selling my hats at shows and galleries across the U.S.

You say on your website that you have always been fascinated by the history and arts of Europe, Central Asia and the Far East? When and how did that interest start?

I think it was a hunger to learn beyond what I was taught in school, which was very “white culture” and U.S.-centric. There’s an exotic appeal to cultures that are very diverse from my own.  Joining the historical reenactment group gave me a vehicle for self-study into the history of Central Asian and Far Eastern countries that had contact with Europe via the Silk Road and other trade routes.  The more I learned, the more questions I had about why other arts and cultures developed along different pathways.  Why did the Chinese and Ukrainians embroider everything they wear? Why did Mongols and Persians develop boots with upturned toes?  How was felt discovered?  Why are textiles so different, even among the sub-sets of an individual ethnicity? Why did dance develop so differently in Europe than it did in the Middle East and Asia? Some of these questions remain unanswered, and thus my learning continues.
Travel is an extension of that learning.  I spend a lot of time studying artifacts in museums and architecture in historic quarters or “old towns”, trying to gain an understanding of the history that shaped the culture, and how that drives the interface between cultures in our current world.  Art is how people express themselves; to learn about a person’s art, is to learn about what makes them tick.  If given a chance, art can replace the phobic fears that we have about each other.

How does that knowledge inform your creative process?

I love taking ethnic and historic components and reinterpreting them.  I have, on occasion, been asked to do historical reproductions, but it always feels like I am copying someone else’s’ work.  So I always caveat that with “I can make a similar thing” so that I can honor the history and tradition of the original piece, but put my own stamp on it.  That may mean translating the piece into other colors or fabrications, or adding beadwork where none existed on the extant piece, or some other detail that will identify me as the maker of that hat.

Tell us more about the process of making the hats for Homebody, in particular.

I have remade kuffes for two other projects:

This one was for a customer who wanted a favorite hat resized so he could wear it.  http://afghantribalarts.com/the-happy-hat-connection/

This one was one of those “dog ate my homework” situations, incredibly challenging but fulfilling as well. Here is the annotated pictorial.

Rachel Biel from the TAFAList and ArtisanMade made those two referrals, Homebody Kabul was her third referral.  I probably owe her some matchmaker fees : )  The previous two projects gave me a hands-on understanding of how this style of headwear is made, which was instrumental in my work on the Homebody Kabul project (as well as now establishing a reputation as being a kuffe refurbisher).
After reading the script and speaking with the director regarding her vision for the play, I scanned the internet for examples of hat styles from the region.  With those pieces in mind, I matched each hat to a selection of fabrics and baubles that I had from my personal collection. I spent several hours applying trims, beads and embroidery over the machine embroidery on two of the hats to keep the flavor of those hatsintact. One hat (in green and burgundy) was painted and then covered with a distressed piece of theater costuming, and another was completely covered over with suzuri, a hand embroidered textile that I brought home from my last trip to Istanbul. The blue conical hat was a very happy find at a local thrift store, that I doubled down on the over-embroidery.  The final hat was made from scratch, again from Turkish suzuri.  I tried to reflect passages from the play in all these hats.

You donate a portion of your profits to charity. Why did you chose these charities in particular?

For several years I have donated a percentage of sales (not profits) to non-profit organizations working to make my community a better place for the poor and displaced.  For several years that was Real Change News, part of the international network of street newspapers that advocates for the homeless.  This year I shifted focus to the International Rescue Committee (IRC) and their work in supporting Syrian refugee relocation (which is a form of homelessness).
This year I turned my art into a form of political activism, and made 20 hats gratis for the Women’s Marches in Seattle, Olympia, Sacrament and Washington DC.  I received so many requests for my “kittyhats” after the march that I started selling them, with 50% of the purchase price benefitting Planned Parenthood, which supplies basic health care to low income women. I am now preparing hats for the Science Marches, which will benefit the Scientista Foundation, a campus for women in science, technology, engineering and mathematics (STEM), sectors which are also at risk of being defunded by the current administration.
Homebody runs in The Studio until May 7. Tickets and more information can be found here.