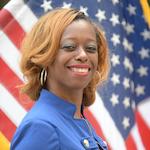 Join us Sunday, May 5th following the 2pm matinee for a conversation with Mary-dith E. Tuitt about Black Veterans in Boston: From the 54th and the Tuskegee Airmen to Today. Mary-dith E. Tuitt, “Ms. Mary” graduated from Boston Technical High School in 1985 and entered the United States Navy after 1 year of delayed entry.

Mary served fourteen (14) years as a [AD3] Navy Aviation Machinists Mate, first on active duty and then in the active & inactive Reserves. Mary reached out to the military archive, research on women of color in the USN and in 2010 she received information that as far as the archival research shows she might be the first African American female Aviation Machinist Mate (jet mechanic) in the Navy.

Mary served as former Chief of Staff for State Representative Gloria L. Fox since 2009; she has worked as Constituent Services Coordinator for Boston City Councilor Charles Yancey, providing support to the underserved communities of Boston, and has worked on various political campaigns. Over the years Mary has always been involved and vested in her community.  She has been active with organizations and groups that focus on Veteran and Women Issues; presently serves as Commissioner on the Massachusetts Commission on the Status of Women, Executive Committee member of the National Association of Commissions on Status of Women, formerly on The Boston Veterans Advisory Council, serves as Senior vice Commander at the Wm. E. Carter American Legion Post 16, the Organization of African American Veterans, and former Associate member of the Veterans of Foreign War post 1018.

Mary is a proud mother of two children; a daughter Mya and a son Maliek.

A life-long believer of “giving back to the community” : Mary uses her many skills to enrich, enhance and empower her Community. #positiveimpact #strongwoman #girlpower