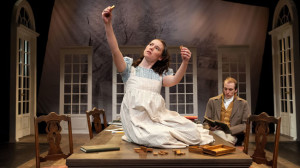 The Nora promotes the feminine perspective through mainstage productions, “That’s What She Said” events, providing opportunity, support and mentoring for female artists and the exploration of gender and feminism.

Queens Girl In the World

A funny, heartfelt tour de force solo show with one actor portraying over a dozen characters!

The Half-Life of Marie Curie

Lee Mikeska Gardner & Debra Wise light up the stage like radioactive isotopes in this two-hander.

ART IS OUR ACTIVISM On(line) Gala