Join us after the show on Wednesday, September 20, 2017 for a post-show conversation with Love Letters columnist Meredith Goldstein for her take on dating in the modern age and across the multiverse! 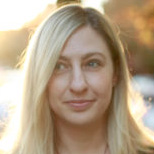 Meredith Goldstein is an advice columnist and entertainment reporter for The Boston Globe. Her advice column, Love Letters, is a daily dispatch of wisdom for the lovelorn that has been running online and in t he paper for eight years. In 2018 she’ll release two books: Am I Doing It Wrong, a memoir about writing an advice column (Grand Central), and Chemistry Lessons (Houghton Mifflin Harcourt), a young adult novel about a young woman who tries to use science to manipulate her love life. Her first novel, The Singles (2012), was about a group of dateless guests at a wedding.