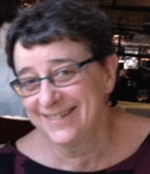 Sonia Hofkosh is Associate Professor in the English Department at Tufts, where she teaches courses in 18th and 19th Century British Literature, feminist theory, science fiction, and the intersection of literary and visual studies.  Her publications include a study of the simultaneous commercialization and feminization of literary culture at the turn of the 19th C called Sexual Politics and the Romantic Author, and articles on various topics, such as early women’s magazines; the invention of photography; the everyday; and writing by Jane Austen, William Wordsworth, and Mary Shelley, among others.