Join us April 18th, April 25th, and May 2nd at 8pm for Genie in the Machine: Virtual Play Readings on Artificial Intelligence. Each night, 10-minute play readings will be presented via Zoom and Facebook Live by the Catalyze Playwriting Group, inspired by Ada and the Engine.

Michael Ricca
In
What Matters Most
with Ron Roy, on piano

Singer Michael Ricca will perform his one-man show What Matters Most, a lively and poignant musical evening exploring the people, places, and ideas that matter most in life. Using an array of musical styles, What Matters Most looks at how we determine our priorities, and the many ways we evaluate what’s important to us. This musical meditation on our values, features an eclectic mix of songs by Michel Legrand, Stephen Sondheim, Cat Stevens, Elton John, Burt Bacharach, Duke Ellington, and many more. As always, Mr. Ricca will be joined by the incomparable Ron Roy, on piano.

About the Artist
Michael Ricca has performed in jazz and cabaret rooms, theatres and venues throughout New England, Chicago and New York, most recently in several performances at the Metropolitan Room.  He’s headlined at several New York area venues, including Arci’s Place and Danny’s Skylight Room.  In 2014, he made his seventh sold out appearance at Scullers Jazz Club in the show, Still That Boy.  For many years, he performed with the local jazz vocal group At the Movies. Their CD, Reel One, was released in 2003. The group received the IRNE award for best cabaret performance in 2004. Also an actor, Mr. Ricca is a founding member of Titanic Theatre Company. 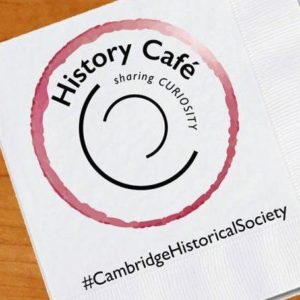 In partnership with The Cambridge Historical Society, we invite artists David Fichter, Eryn Johnson, and Vincent Siders to discuss how the arts can serve as a catalyst for– or reaction to– change. We ask, how is their work informed by a history of social justice in the arts? Does this build on a legacy of such work in Cambridge? Dr. Marty Blatt will moderate the conversation. This event is part of Central Square Theater’s Central Conversations series and the final History Café of the Society’s 2019 “How Does Cambridge Engage?” programming.

This event will be held during the Nora Theatre Company and Bedlam’s production of The Crucible, framed and inspired by the #metoo movement.

Vincent Siders is an award-winning actor, director, producer, and educator. He serves as the Lead Instructor and Director of the Ambassadors of Youth Underground at Central Square Theater (image top right).

David Fichter is an internally-recognized muralist, and his art can be found throughout Cambridge. Depicted here is a detail of his 1994 mural “The Potluck,” located in Central Square (image bottom left).

Dr. Martin Blatt is director of the Public History Program at Northeastern University. He has an advocate of the arts and a longtime supporter of the Central Square Theater (image bottom right). 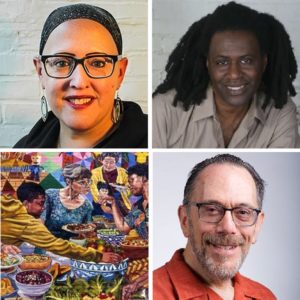 “Bedfellows” offers a peek into the bedroom window of Abe Lincoln and Joshua Speed, his roommate and most “intimate companion.” On January 1, 1841, Speed induces Lincoln to end his engagement to Mary Ann Todd. Lincoln, guilt-ridden, slides into a state of depression. Speed adds to Lincoln’s despair when he announces that he is selling his business, moving back to Kentucky and reveals his engagement to Fanny Henning. Lincoln discovers a letter from Speed’s mother suggesting that Lincoln is prone to “streaks of lavender” and that Speed’s reputation will be ruined if he continues to fraternize with a man of such common heritage. Melancholy breeds self-destruction as Lincoln puts a pistol to his skull. At the end of the day Lincoln’s life and his friendship with Speed are spared.

Shelter of Last Resort catapults us from an antebellum plantation to the Superdome post-Katrina. This dark Louisiana Fugue chronicles the stories of the entitled, the enslaved, and the innocent. The future entwines with the past creating a murderous current in which promises are made and betrayals are exposed and each soul searches for light amidst the rising water.