Join Dr. Malick Ghachem, law and revolution expert, for an exciting conversation after the Wednesday, November 1 performance of The Revolutionists about justice, war, and the Haitian uprising for independence. 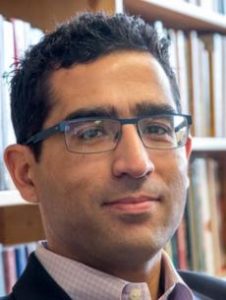 The book received the American Historical Association’s J. Russell Major Prize for the best work in English on French history and was co-winner of the Caribbean Studies Association’s Gordon K. and Sybil Lewis Prize for the best book published in the field of Caribbean studies over the past three years.  He teaches courses on the Age of Revolution, Slavery and Abolition, American criminal justice, and other topics.

Professor Ghachem earned his undergraduate and law degrees from Harvard University and his doctorate in history from Stanford.  He clerked for the Honorable Rosemary Barkett of the U.S. Court of Appeals for the Eleventh Circuit in Miami, FL in 2004.  A member of the Massachusetts bar, Professor Ghachem practiced law in Boston from 2005 to 2010 for two law firms: Zalkind, Rodriguez, Lunt & Duncan LLP and Weil, Gotshal & Manges LLP.  For part of that period (2006-2007) he served as a lecturer in MIT’s Political Science Department.  Between 2010 and 2013, he taught at the University of Maine School of Law in Portland, ME, where he is now a Senior Scholar.

He writes occasionally on topics in American and comparative constitutional law, and has published a wide range of articles in the fields of French colonial and American legal history, among them “The Antislavery Script: Haiti’s Place in the Narrative of Atlantic Revolution,” in Scripting Revolution: A Historical Approach to the Comparative Study of Revolutions, ed. Keith M. Baker and Dan Edelstein (Stanford, CA: Stanford University Press, 2015), 148-167; “The Colonial Vendée,” in The World of the Haitian Revolution, ed. David Geggus and Norman Fiering (Bloomington: Indiana University Press, 2009), 156-176; and “From Emergency Law to Legal Process: Herbert Wechsler and the Second World War,” co-authored with Daniel Gordon, 40 Suffolk University Law Review 333 (2007).  Ghachem is the editor of “Slavery and Citizenship in the Age of the Atlantic Revolutions,” Historical Reflections/Réflexions historiques 29, no. 1 (2003).  He is at work on a new study of the revolt against the French Indies Company in the 1720s and the rise of the plantation complex in colonial Haiti.