The Father puppet – modeled after Saul Slapikoff. And Fatih, played by Debra Wise. A scene from State of Grace, inspired by the writings of Grace Paley. Puppet and set designed by David Fichter.

MAKE A GIFT IN MEMORY OF SAUL SLAPIKOFF

Saul Slapikoff was a dear friend of Underground Railway Theater and Central Square Theater. He passed away August 26, 2022 at 90 years old. You can read his obituary online. 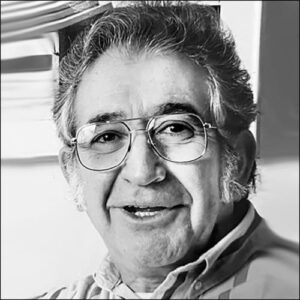 Saul Slapikoff was a scientist and social activist, who taught biology and American Studies for many years at Tufts. He was a long-time contributor to Radical Teacher,  most recently with a 2019 article Myths of Gender: Biological Theories About Women and Men.

And he was a playwright and a lover of theater, who was for decades a friend to first Underground Railway Theater and then to Central Square Theater.

Saul Slapikoff’’s connection to Underground Railway Theater began in the 1980’s. He was inspired by URT’s Sanctuary – The Spirit of Harriet Tubman, and invited founding Co-Directors Wes Sanders and Debra Wise to teach a workshop at Tufts about creating theater to explore questions related to social change. He brought a group of women from Tufts – both faculty and staff – to see URT’s Washed Up Middle Aged Women, and loved to tell me about their laughter and moments of recognition. After he retired from Tufts, he told me he wanted to write plays, and be active in the theater community. He wrote two pieces I remember in particular. One was about his family – a young man (I assume based on Saul) meets his sister to sort out their mother’s belongings after her death. There are flash-backs to his parents’ early married life – as a young immigrant couple in New York City; I remember in particular one scene when his father, a tailor, was measuring a garment on his wife standing on a kitchen table, under a bare light bulb. I got such a vivid sense of Saul’s appreciation of his parents and family, even if his own journey – spiritually and politically – took him in different directions. And I remember a play he wrote called Tony’s Pizza, set in a pizzeria run by a Palestinian on the West Bank, a place where people congregated for conversation, both political and personal – and to weigh dangerous and essential activist actions. I just ordered a copy of Saul’s book from the 1990’s, Consider and Hear Me – Voices from Palestine and Israel, sorry that I did not read it in time to discuss it with him. But I knew his inspirations: social justice, love, and friendship. In 2007, Saul served as the model for a puppet character in URT’s States of Grace, inspired by Grace Paley’s short stories; the puppet of The Father is pictured above. Saul knew and loved Paley’s work – identifying with her, certainly, as a socialist child of Jewish immigrant parents; and the Father’s advice, though in Paley’s words, sounds like Saul to me:

“The main thing is this—when you get up in the morning you must take your heart in your two hands… Then talk softly, don’t yell… don’t be ashamed. Very likely no one will be watching. Then you must talk to your heart… Say anything, but be respectful. Say—maybe say, Heart, little heart, beat softly but never forget your job, the blood. You can whisper also, Remember, remember.”