Her Aching Heart fight choreographer Danielle Pointe-Tezana talks to intern Rebecca Joy about the ethics, the importance, and the fun of the show’s fight scenes.

Rebecca Joy: How long have you been doing fight choreography?

Danielle Pointe-Tezana: When I was 16, I was at a summer intensive in New York and I fell in love with it. I said, “You can fight with swords?? Onstage?” It had never occurred to me that that was an entire discipline. I’ve done a lot of study about ethically placing these things on stage.

RJ: What are some of the challenges that you have to think about when you’re choreographing for two females?

DP: At the risk of sounding overly political, women often have to think more about violence in order to survive in a metropolitan area–what you can do to protect yourself and protect other people. Aimee Rose and Lynn were always very careful about protecting one another. It made my job a lot easier than if I had had—male or female—two roughhousing, pushy people.

RJ: How did you build on Her Aching Heart’s descriptive stage directions? 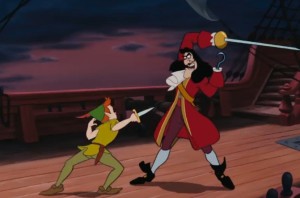 DP: The script says, “If you can swing from chandeliers or cut candlesticks, we’d love to have you do that.” That presented the challenge of how to make it look real and have the audience suspend their disbelief without the actors actually killing each other. We made little concessions, but we made them in a fun way, and they ultimately became some of the most awesome parts of the show. It’s a comedy. It didn’t need to be gory. It needed to be fun. For the fight between Rothermere and Harriet, I thought Captain Hook and Peter Pan. Obviously with Rothermere as the Captain Hook character. He’s even got the hair.

DP: Yes. In the rehearsal process, we built on the way they moved and naturally interacted with one another. Aimee Rose has a background in clowning, and Lynn has a background in dance. Having the two of them be movers was way more important than having anybody that had necessarily been trained in sword fighting. In my opinion, and my teacher used to say this all the time, fight choreography is a lot more like a dance than it is like a fight.

RJ: Do you watch Game of Thrones? When Arya trains sword fighting with Syrio Forel and he calls it “water dancing”?

DP: That’s how I taught. I was inspired by Syrio Forel. [laughs] Flicking a bead of water off the end of the blade was the imagery we always used, based on how gentle you can go. Because if you start doing it like you’re actually wielding a sword, you’re going to hurt somebody, and it’s most likely going to be you. [laughs] Nobody wants that. And I definitely don’t.

DP: There’s only two actors! I don’t want anyone to get hurt ever.

RJ: Why do you think the fight scenes are important to Her Aching Heart?

DP: It’s so much a part of that bodice-ripping genre, but I think that physicality is an important part of telling the story. You can tell a lot about a person by the way they fight. One of my favorite parts is when Harriet ends up with her sword right between Rothermere’s legs and she just taps, like “I could get you there,” and she doesn’t. And he picks up the sword because he realizes she’s not going to kill him. Harriet’s been changed by Molly at that point, and it’s her relationship with Molly blowing up in her face again. Lynn and Aimee Rose do a perfect job of articulating those little acting moments that happen inside fights.

RJ: What about the less funny side of onstage violence?

DP: Harriet’s dress needed to come off in order for her to fight effectively, and I said, “I want there to be a moment where she gets on the ground and she decides to take it off and fight.” I didn’t want her clothes to be taken off by Rothermere because that makes an entirely different image. It is a very serious moment that starts a very silly sword fight. I spent a long time thinking about how to properly give Harriet the power to go through that kind of sword fight and do so in a way that people would still laugh and not be so disheartened by the darkness of what was happening.

RJ: Anything else you want to add about working with the show?

DP: I had a fantastic time. Lee, as a director, knows exactly what she wants but she’s willing to watch things evolve and she adapts really well. That made the experience really positive for everybody in the room. This is so much fun! I never get to do theater this fun in the middle of the summer. It’s so much fun.