Alan Ayckbourn knows the rules of the well-made play.  He has written several of them, including Relatively Speaking, of which he has said, “I did set out consciously to write a ‘well-made’ play. I think this is important for a playwright to do at least once in his life, since, as in any science, he cannot begin to shatter theatrical convention or break golden rules until he is reasonably sure in himself what they are and how they were arrived at. It intrigued me as an exercise…. I remember sitting down and trying to write a piece that was, if you like, actor-proof. A play that would have a mechanism in it that would need only the slightest of pushes to make it work.” 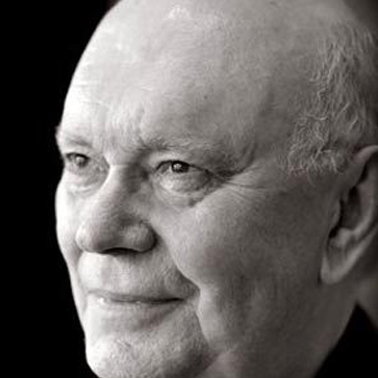 From the time of Relatively Speaking, written in 1967, Ayckbourn has shown a propensity toward shattering theatrical conventions in ways that both amuse and enlighten.

One of Ayckbourn’s most interesting experiments with dramatic structure is his trilogy, The Norman Conquests. The three plays, Table Manners, Living Together, and Round and Round the Garden, take place in a dining room, a living room and a garden of the same country house. The events of each play occur simultaneously in each location. Thus, the offstage action of each play is what constitutes the action of the other two plays, and yet, remarkably, each play functions as a completely separate dramatic entity.

In Bedroom Farce, Ayckbourn takes the opposite approach.  He places three bedrooms belonging to three different couples side-by-side on the stage, thus constructing the action to achieve the greatest comic mileage. He introduces, for example, a self-absorbed fourth couple totally unaware of the havoc they are causing, and allows them to move among the three bedrooms, disturbing everyone’s peace and quiet.

Showing the audience all three settings at once accomplishes another significant objective. Unlike in film or television in which the camera establishes and controls the focus of the audience, the theater can only suggest where our focus should be placed. Even though the action of the play occurs in only one room at a time, our awareness as an audience that the other rooms exist simultaneously and in the same stage space, albeit only in the shadows, creates the understanding that each scene is part of a larger construction.

In Intimate Exchanges, a collection of eight interconnected plays with a total of sixteen possible endings Ayckbourn has set a particularly daunting task for himself. Each play is complete in and of itself. The choices the characters make determine the differences. For example, if Celia chooses to break her own rule and have a cigarette before six o’clock, she remains onstage, hears the front doorbell and encounters Lionel Hepplewick. If her willpower is strong enough, she continues offstage, misses Lionel’s calling, and meets Miles Combes shortly thereafter, and we’re off into another play. The length of time between scenes reinforces the significance of the choice; the more significant and difficult the choice, the longer it takes for the ramifications to play themselves out. Thus, Celia’s decision whether or not to smoke results in the next scene occurring only five seconds later. The scenes then progress in increments of five: Five days later, five weeks later and five years later.

Some critics have referred to Alan Ayckbourn as a British Neil Simon. While both are prolific, commercially successful and experts at comedy, there are major differences between the two. The most obvious is that while Simon is a master of the joke, independent of the situation, Ayckbourn’s humor is more dependent on character relationships and is visual in nature. As Ayckbourn himself has pointed out, “If you dropped a play of his (Simon) on the street and the pages fell out in any old order, you’d still be laughing as you picked them up. If you dropped a play of mine, too bad.” Ayckbourn believes that a play is not successful when it can be heard more than seen. He says, “It’s very hard – for most playwrights, but for one like myself who actually prides oneself in conveying information almost equally through sight and sound – to understand a play properly if you’re not looking at it. And if you see people sitting there looking like they’re listening to a piece of music – not asleep, just with their eyes closed, listening – then I know something is terribly wrong with my play.”

As in the Norman Conquests, one of the most engaging aspects of Absurd Person Singular is Ayckbourn’s use of offstage action. He explains his use of the device this way:

“Very early on in my career as a dramatist I discovered that, given a chance, an audience’s imagination can do far better work than any number of a playwright’s words. Thus, when I came to Absurd Person and started by setting the action in Jane and Sidney’s sitting room, I was halfway through the act before I realized that I was viewing the evening from the totally wrong perspective . . . By a simple switch of settings to the kitchen, the problem was but solved, adding incidentally far greater comic possibilities than the sitting room ever held.”

Ayckbourn’s use of offstage action is another example of not only his craft, but also his willingness to amuse an audience, even as he makes them think. Critic Michael Billington has written of Ayckbourn:

“His plays are anything but cosy. They seduce audiences with the promises of sweets, yet they slip them the bitter pill of recognition. And increasingly leave them in a state of prickly discomfort. Ayckbourn gives theatregoers a good night out. But he also leaves them asking themselves, ‘are we really like that?’”

Ayckbourn’s People: Men & Women, Together And Not

As evidenced by Billington’s observation, all of the technique in the world wouldn’t make Ayckbourn’s plays successful if they weren’t able to connect with an audience on an emotional level. This Ayckbourn accomplishes through his complex, believable characters.

Many of Ayckbourn’s plays examine male/female relationships in marriage, courtship and in families. Although far from stereotypes, many of Ayckbourn’s men exhibit similar characteristics. In general, they may mean well, but they have a very difficult time meeting the needs of the women in their lives. At times they can be cold, bordering on cruel. Dennis in Just Between Ourselves eventually contributes to his wife’s mental breakdown by his insensitivity. When she asks for his help, the best he can do is offer to be more handy around the house, saying, “When you’ve got a moment why don’t you sit down, get a bit of paper and just make a list of all the things you’d like me to help you with. Things you’d like me to do, things that need mending or fixing and then we can talk about them and see what I can do to help. All right?”

Ayckbourn’s men tend to be either aggressively egotistical or completely unassuming. Neither type does much for the woman he marries. The women in Ayckbourn’s plays have careers, babies and affairs, and they are generally a tough lot. Evelyn in Absent Friends reads tips in a magazine on “keeping the man in your life happy” and says, “I’m not doing that for my bloody husband. He can stuff it.”  Despite all the pain in these marriages, the characters make the best of their situations. As Nick says of his wife in Bedroom Farce, “She’s amusing occasionally, very efficient when she wants to be – pretty bright, and worse is that she can be totally self-obsessed, erratic, bad-tempered and unreliable. But taking it all in all, I could have done worse.”

In the final analysis, Ayckbourn’s plays are a brilliant fusing of theatricality and theme. In writing about another of his plays that involve choices, Sisterly Feelings, Ayckbourn summed up this blending of technique and insight:

“This device has the effect of stimulating actors, irritating stage managers and infuriating box office staff. By way of an apologia, I can only point out that the device is not employed merely out of cussedness. As I say, the plays are about choice. How much do we really control our lives and how we really make decisions or just think we do  . . . I do believe that mostly we finish up with the friends and partners in life that we deserve.”