A Disappearing Number is SOLD OUT.
If you would like to join a wait list for tickets, please arrive at the box office one hour before the performance.

In 1913 a clerk in rural India, Ramanujan, sends a letter to the renowned Cambridge mathematician, G.H. Hardy, containing an extraordinary series of theorems. What ensues is a legendary, intellectually passionate, seven-year collaboration. Interwoven with the present-day story of Ruth, a British math professor, and her husband, an Indian-American businessman. Drama, comedy, Indian dance and music weave an immersive experience the New York Times called “mesmerizing”, a love-story that combines the clashes of culture, the sensuality of ideas, while illuminating the mystery of mathematics. A Disappearing Number received the 2007 Olivier, Evening Standard, and Critic’s Circle Theatre Awards for Best New Play. A Disappearing Number is partly Inspired by G. H. Hardy’s book A Mathematician’s Apology.

“Evokes and exemplifies the pleasure of discovering the vital connections between theory and reality, past and present, and the lives of human beings.”

“Everything adds up beautifully in Complicite's exquisite meditation on maths, love, grief and the way the past is linked to the future and the living to the absent.”

The running time is 2 hours with no intermission.

Central Conversations for A Disappearing Number

Join us for pre and post performance conversations throughout the run. 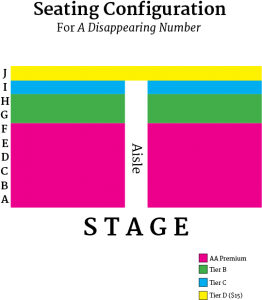 Recommended for adults and teenagers 13+. If you have any concerns about content or age-appropriateness, please contact the box office at 617.576.9278 x1.